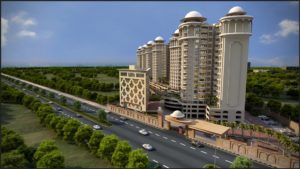 Making of Paras Emperor was nothing short of setting an industry standard In the end we are thrilled at what we have achieved The blue print has come out nicely in matter Our belief to try out something brazenly new, risky at first, has met a very encouraging response from our patrons. There were challenges, but we allowed instincts to take center stage and imagination to roam free, We asked questions We explored options.

We followed rules but shunned conventions We were clear that we wanted nothing short of a towering masterpiece. A home LIKe no other; a home beyond compare! Be it architecture, amenities or the aesthetic integrity.
Paras Emperor, located at Shahpura in Bhopal is a premium residential project offering luxurious 3, 4, and 5 BHK apartments for sale. Launched by Paras Hermitage, this project is available only from the developer. The buyers can enjoy modern amenities such as, a gymnasium, a swimming pool, a club house, rainwater harvesting system, 24×7 security, landscaped gardens, indoor games, a library, CCTV surveillance, a banquet hall, etc. Situated in suburb Bhopal South, this is one of the topmost localities in the city. Orion International School, Rajeev Gandhi School, Maharishi Vidya Mandir, Mansarovar Public School, Jawaharlal Nehru Public School, Milestone Public School, and several other schools serve this locality.